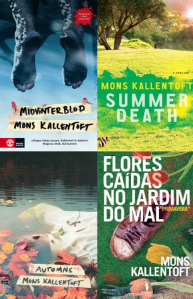 The first four books of the series, featuring covers from different editions in different countries

“An investigation consists of a mass of voices, the sort you can hear, and the sort you can’t.  You have to listen to the soundless voices, Malin.  That’s where the truth is hidden.”

If I start this review by mentioning that the Malin Fors series comprises a collection of books revolving around the theme of crime in Sweden, I’m positive that many readers’ first thought will be something like “Oh, here’s another poorly-written book about the police trying to catch a muderer”, or even “It’s just another attempt at imitating Stieg Larsson’s Millennium Trilogy”. Dear reader, rest assured that Kallentoft’s novels don’t fall in either category of thinking. Indeed, I have read Larsson’s three books featuting the mysterious heroine Lisbeth Salander, and as much as I have put them on a pedestal, I dare to say that Kallentoft’s work is better by far.

A depiction of Malin Fors, taken from the author’s official website

In common with Larsson’s Lisbeth Salander, Malin Fors is an uncanny character, who hides a very human and sensitive character benneath a seemingly impervious surface. At the start of the first book (Midvinterblod – Midwinter Sacrifice), Malin is presented to the reader as a policewoman who struggles to cope with the difficulties of being a single mother. Whilst showcasing a brilliant and intuitive talent for investigation at Linköping’s police squad (much due to being the only feminine element, the books seems to insinuate), Malin is constantly on the verge of self-destruction, a pattern that emerges from the first pages and that converges into a downward spiral as her personal story evolves. Having said that, it’s clear to you now that this Swedish investigator’s ups and downs and the plot of the crimes aren’t given an equal share of importance by the author, who definitely favors his protagonist.

Hence, who is Malin Fors and why is she such an outstanding character? The Linköping native had a baby daughter, Tove, when she was in her early twenties, with her then-boyfriend and later ex-husband. It goes without saying that it had been an unplanned pregnancy, which eventually resulted in a failed marriage and the demanding duty of raising a child by herself. Moreover, her dysfunctional relationship with her distant parents (metaphorically and literally speaking, as they live in Tenerife) and some unresolved issues of her childhood are at the core of her angst, of which she tries to escape by immersing herself in alcoholic drinks; ultimately, she will have to pay the price of this disruptive addiction. On the flipside, the vulnerability of the character makes her very relatable, and therefore easy to empathize with.

Regarding the plot itself, the chosen setting was Linköping, the author’s home town. Located in southern Sweden, this discreet and highly academic city has become, over the years, the ideal residence for scholars, doctors, engineers and other highly influential people of the academic world. Malin often feels like a fish out of water in this type of environment, which she believes to be pretentious and overly competitive. It may have to do, however, with her ever-present sense of inferiority, a personal feature she admits to possess, if only to herself.

The Malin Fors series is composed, by far, of 8 books, with the writer trying to accomplish the tenth-book mark. I have read the first four, the only ones that have been translated to my mother language until now. You may read them separetely, or out of order, as there is a whodunit case for each of them. Nevertheless, the evolution of the characters, especially Malin’s relationship with her family and the struggle against her demons, follow a narrative stream that shouldn’t be suspended, at the risk of missing out the best part of the novels.

Albeit the distinguished  nature of Linköping, in its fictional depiction it is prone to the occurrence of crime. What sets these books apart from others that were placed in the same category is the way that Kallentoft constructs the narrative. He is, indeed, a very good writer, which many people wouldn’t expect, concerning the genre of novel we’re talking about. Alongside his phrasing style, his option of highlighting both the voice of the victim and of the murderer is a very clever one. In fact, the deceased victim comments on the growing pains of the investigations, observes his or her loved ones’ reactions and grieving process, and tries to communicate with Malin in order to help her found out who is the responsible for the crime. Remember the quote at the beginning of this review? The soundless voices that are metioned refer to the voices of the criminal and the victim/victims, whom only Malin can perceive, as if she possesses a kind of sixth sense, an intuitive capacity of interacting with other reality dimensions. 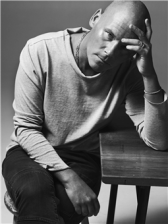 Furthermore, I can give you a glimpse of what type of crime Malin has to investigate in each of the first four books. Kallentoft has atributed a season to each novel: firstly winter, then summer, automn, and finally spring. Thus, the weather of the specific time of the year holds great significance for the characters’ mood and, actually, for the muder setting. Thereby,

– In the first book (Midvinterblod, “Midwinter Sacrifice”), a naked obese man is found hanged in a tree, in a deserted and snowy forest.

– The second one (Sommardöden, “Summertime Death”) is, in my opinion, the most terrifying of them all: local teenage girls mysteriously disappear, only to found out later that one of them had been raped and that the others had been killed after having been violated as well; you have to have the stomach to read this one in particular, in my view.

– The third (Höstoffer, “Autumn Killing”) tells the story of a nouveau riche who is found stabbed in his recently acquired castle.

– The fourth (Vårlik, “Savage Spring”) is my favorite: it starts with the explosion of a bomb in Linköping’s main square, which spreads fear and depression among people, who couldn’t foresee that such a thing could happen in their low-profile town; it’s also in this book that a secret of Malin’s childhood is unfolded, which will make her feel simultaneously betrayed and relieved.

I hope I haven’t bored you with this long review. In truth, I wanted to be sure I would be able to recount the feelings I had about these four books which accompanied me this autumn; I feared that if I had talked about them in a more superficial way, it wouldn’t had been fair to them. If you’re in the mood of reading crime novels, I suggest these, as they cover different types of crime, are brilliantly written and feature a haunting protagonist.

Welcome to our blog!

Blogs and sites about Books